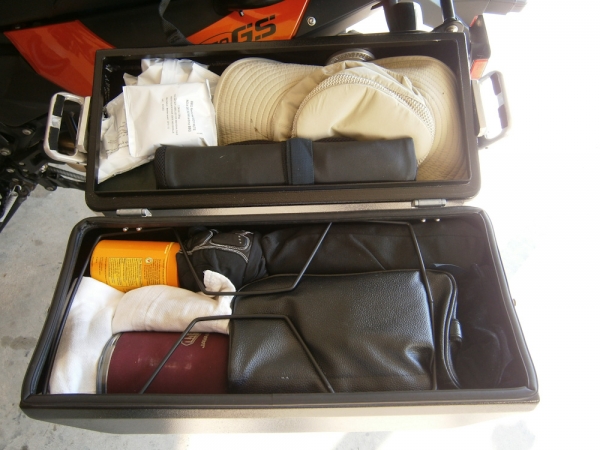 Saddle bags are getting full. 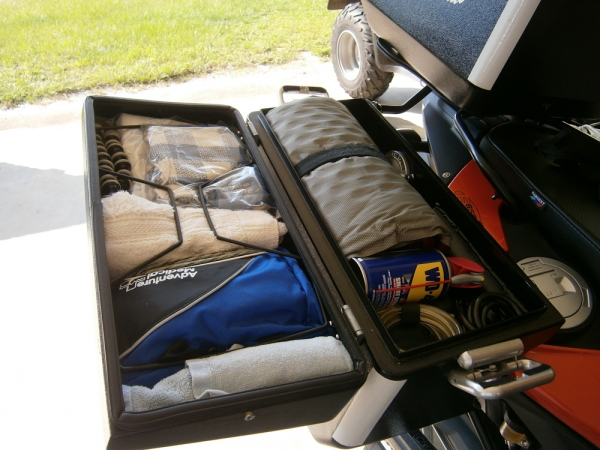 The other saddle bag. 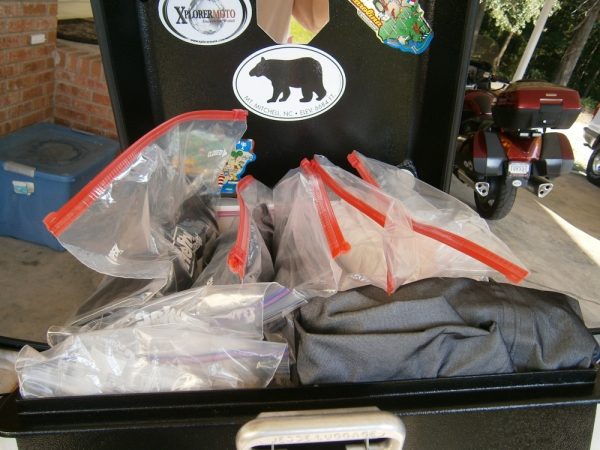 Our clothes are kept in our top boxes. 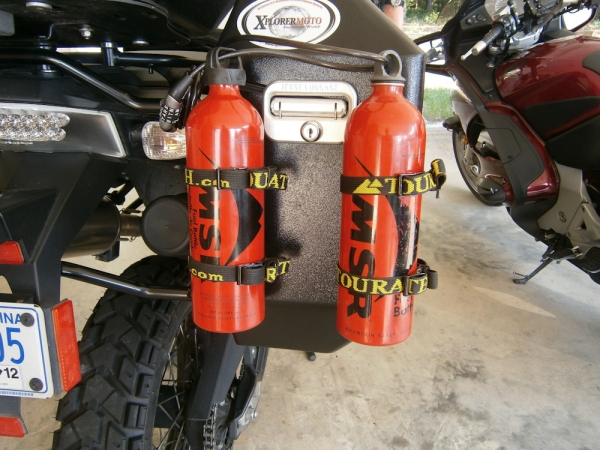 This is how we carry our cooking fuel. 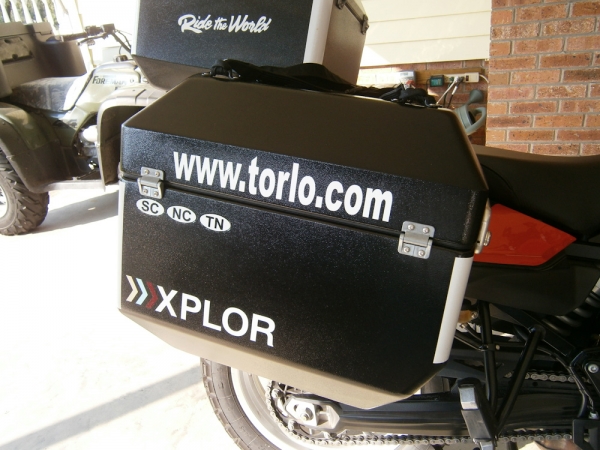 We have done some packing today. We will finish packing tomorrow, We will take Lady to the kennel tomorrow afternoon. We will leave bright and early Sat, Sept 3rd.

September 3.rd "West or Bust" is getting close. We're taking inventory of all we need to cram onto our bikes. I'm trying my best to eliminate stuff I "think" we won't need. Decisions decisions. We're changing oil on the bikes this weekend, along with a good visual to make sure everything is buttoned up and secure.

The plan is to get to Nashville, TN on Saturday, Kansas City, KS Sunday, Sioux Falls, SD Monday, at which point we'll ease back on the travel speed, and start enjoying and having fun. From there we'll head over to The Badlands before heading to Rapid City, and drop down to Mount Rushmore. Then we'll roam around in the Black Hills of SD for a couple of days. Devils Tower, WY and The Bighorns is next before we drop down into Cody, WY. From there, head north-west into Chief Joseph Highway, up through Beartooth Pass, before returning into Yellowstone, where we probably will spend at least two days.

From Yellowstone we drop south through the Grand Tetons into Jackson (Hole), then continue south into Utah, heading down through Flaming Gorge and continue down south into Colorado via Grand Junction. From there we'll ride up through Independence Pass and Twin Lakes, then south into Buena Vista, CO.

From Buena Vista  we will cut across up through Cottonwood Pass over to Taylor Park Reservoir before continuing to Gunnison and Black Canyon of Gunnison NP. From there, over to Montrose going south on The Million Dollar Hwy. We'll follow Million Dollar all the way down to Durango, CO, but in between are a lot of awesome off-road mountain passes (around Silverton) we plan to check out. Cinnamon Pass, Ophir Pass, maybe part of Engineer Pass. From Durango, we drop south into New Mexico to catch I40 and turn the handlebars east to head home. This is gonna be epic. This is gonna be good. We can hardly wait. Stay tuned for pictures and videos….

Coming up in September is our trip westward to The Rocky Mountains incl. South Dakota, Montana, Wyoming, Colorado, and parts of Utah. Not sure if we have enough time to get to Glacier National park in Montana. It all depends. We'll be using our BMW F650GS and F800GS Dual Sports on this trip, since we'll try to crawl through some of the nice mountain passes in Colorado, which are not exactly paved. Stay tuned. Main trip report page is Here.

We'll update that page as we progress. 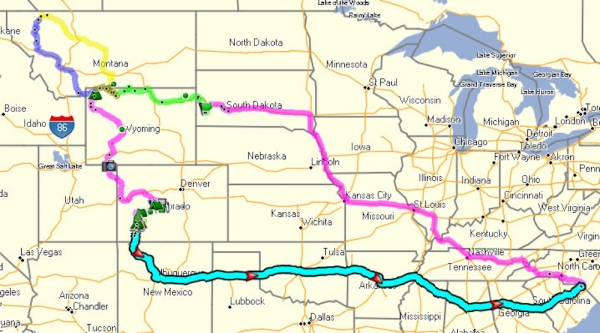 Morrow Mountain State Park campground. We  were very impressed with the campground in the park.

This picture is taken at about 6:30 PM just before sunset.

Had a chance to shoot some photos of Bambi.

Bambi with all her friends to join the action.

What are you looking at???

Burned some logs at night, and had a good time. Have to go back there sometime. Highly recommended.

Still a little cool at night, but don't thing it'll be too bad. Morrow Mountain is not too far from us either. It is also close to Uwarrie National Forest, one of our other camping destinations.

With all the high-tech gear

we've got, we shouldn't have a problem staying warm overnight. We've never camped here before, so it'll be a good opportunity to look around. A little history about the park: The discovery of artifacts in the area attests to the presence of Native Americans 10,000 years before European settlement. European colonization began along the banks of the Pee Dee River in the 1700s. In 1780, John Kirk, a Scotch-Irish settler, established a public ferry, linking the area to a major roadway. Local legends recount the passage of noted people, including Henry Ford, Thomas Edison and Jefferson Davis.

Development of the park began in the 1930s through the efforts of a local committee interested in establishing a state park in the area. By 1937, more than 3,000 acres of land had been acquired, much of it donated by the citizens of Stanly County. The park was opened to the public in the summer of 1939.

Early development of park property was a cooperative effort between state and federal governments. Work crews of the Civilian Conservation Corps and the Work Projects Administration constructed many of the facilities from 1937 to 1942. Additional facilities were added with state funds in the 1950s and 1960s. Today, the park covers 4,742 acres.

The 1800s are still alive at Morrow Mountain. History buffs will enjoy a visit to the homestead of Dr. Francis Kron, which is located at the foot of Fall Mountain. Dr. Kron, who was born in Prussia and emigrated to America in 1823, is recognized as the first medical doctor to settle and practice medicine in the southern piedmont of North Carolina. Dr. Kron traveled long distances to care for those in the area, practicing medicine until after the age of 80. A noted horticulturist, he was also actively involved in education. His home, doctor's office and infirmary, and greenhouse were reconstructed in the 1960s and appear today much as they did in 1870.