Figured I could write a few lines about the bikes I use for touring and just good ol’ mountain road carving.

My main touring bike is a 2015 BMW R1200 GSA. I’ve had this bike since new. I have done all the maintenance and service myself on all the bikes I have owned, and that goes the two bikes I currently have. You get to know your bike a lot better, and so you can do a much better job having the knowledge if something happens on the road. While talking about maintenance, I should mention that I also use and carry on trips, a GS911, giving me the ability I to diagnose potential issues, as well as reset maintenance reminders. 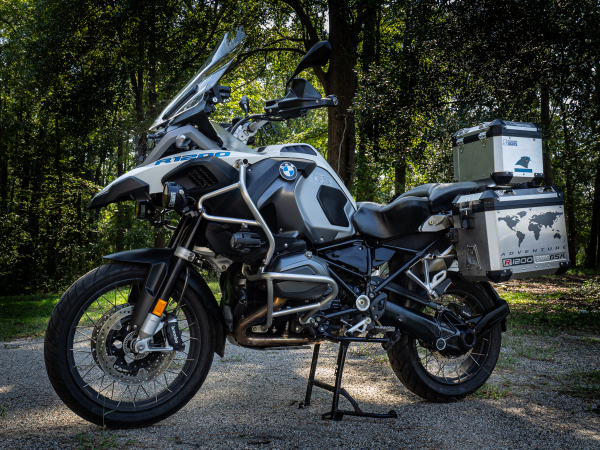 The GSA is a very tall bike, with a 35-36 inch seat height. and gets even taller if you use some of the aftermarket seats. I currently use a Russel Day-Long, which I find do be a very good all day riding kind of seat. The windscreen I use is a PIG tall touring screen, supported by extra shield supports on both sides.

The bike has a set of Clearwater Erica lights, which are mounted on the crash bar on each side of the bike. The light can be easily adjusted using the “wonder wheel” on the left handlebar, when yo can adjust different light intensities for low- and high beam, along with separate light intensities during day /night. The brake light is a Clearwater Billie light, also fully customizable from the canbus.

Other extras are radiator protectors on both sides, bigger side stand foot, BMW Navigator 5 GPS and a Uniden R3 radar detector, among a few other improvements.

I absolutely love this work horse. Never had an issue with it, except had the water pump changed under warranty,  as it started trickling coolant from the weep hole. Current tires: Pirelli Scorpion Trail 2. 40/36 PSI.

The thoroughbred, 2018 BMW S1000XR. I got this bike new in 2018. The main reason for getting the bike was to use it on short day trips, and weekend trips to the mountains. It can’t really compare at all to the R1200 GSA. Completely different animals. And this bike is exactly that, an animal, a beast. It is the fastest and most nimble bike I have ever ridden. 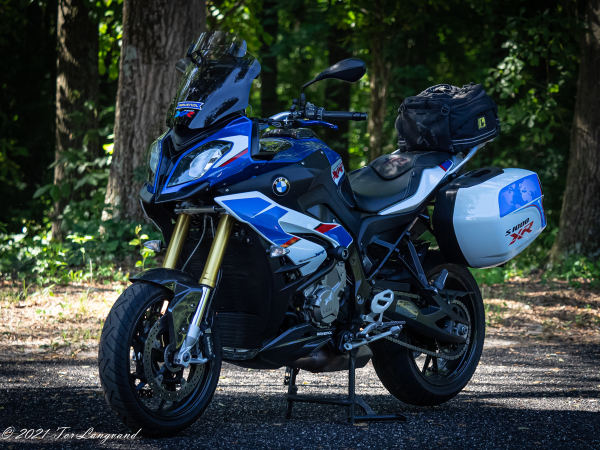 The S1000 XR has the same engine as the S1000RR, but tuned a little different (more torque mid-range). It is still basically a very angry-acting S1000 superbike engine, and its inline four runs at about 5K at ~70 mph.. It is my bike of choice on twisty mountain roads, as it is VERY planted, nimble, with a smooth power delivery that will do whatever you tell it to, whether it be sick acceleration out of corners, or power wheelies in first to fourth gear. It is not what I would characterize as a touring bike. It will do a daily commute, a cross country trip (again, I don’t consider it a touring bike, but it can certainly do it), it will (in capable hands) out-gun and out-handle many super-bikes. For some riders, this will be the ultimate motorcycle that can do almost anything to perfection. For me, it does everything to perfection, except being a perfect touring bike.

So, the R1200GSA for long distance touring, and the S1000XR for serious fun in the mountains, with some weekend camping blended in. I currently have around 13.000 miles on this bike.